That's it. We're done. Mission accomplished. Thanks a lot to directors Ramses and Daniëlle. Apart from being late after getting stuck in traffic and a few interuptions coming from an agressive drunk and some workers, the videoshoot couldn't go any better. I'm really excited. You'll have to be patient though. It'll take a while before it'll be on youtube. Thanks to Eileen, Ronan, Joris and Nina as well for getting up early and helping out. At night we did a little set at another bar in Neukölln. It was packed. Today we're gonna enjoy Berlin. We have to leave again tomorrow. I'd love to hang around some more. There's not much wrong with the place. 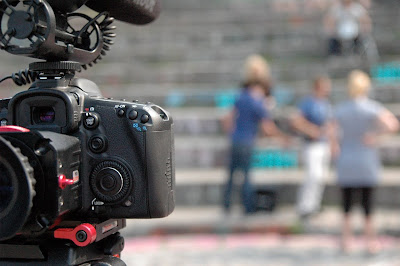 YeahYeahYeah! A lot has happened again. We haven't been relaxing at all in this boring little town. We've only been driving from the one side to the other and back again. Moving equipment, setting up, play and pack up to play somewhere else. It almost feels like work! But so rewarding, especially when you listen to the reactions of the audiences (interesting quote: "the best thing I've heard since The Libertines"). What have we been up to? Well, we had some great plans for doing an electric guerilla gig at Mauerpark. Due to the weather being so unpredictable and another band stealing our spot, the plans didn't work out. We did an acoustic set instead. At night we did the electric set for the first time, at a bar near Rosenthaler Platz. I enjoyed having a good bit of overdrive on my guitar and having the energy of a full band blasting beside me. I guess we're ready for the stages. We've been asked to play in Paris sometime soon. We just might.
Gepost door tududuh op 16:54 Geen opmerkingen:

Saturday was a busy day. Running from one side of the city to the other. First up was a meeting with Ramses, the director of the video, to go through the details again. Shooting on Monday. Then the neverending Tududuh-performance began. We started busking at the Beerfestival at Karl Marx-Allee. It is a bit sad to watch thousands of people drinking beer in the rain. We had some strong competition from this one-man metal band. Check the video below. Impressive! After that we had the biggest pizza in the world and went to our real gig. At a bar called Frühperle. It's a wonderful place. When we finished our show, around 01:00, we went on to the Friedrichshain district to do some busking again. Spectacular! The area houses the biggest concentration of drunk people I've seen in a long time. Around four we ended the night by playing in front of a pizza place. The owner has asked us to play there for some cash and food. Alright, why not. Altogether we played our set over ten times, made some new fans and, our main goal, we're getting better as a band. Fast.

Alright! Day two. Friday. What happened? We all took a shower. That might not sound very interesting, but in this case it was. Our shower looks like a UFO. It's the most inventive construction I've ever seen in a bathroom. Besides this adventurous start of the day we played our electric set a few times. Since we've been rehearsing our acoustic set for our gig in Paradiso last week, we haven't played electric for a while. We made a few pictures of the site of the rehearsal studio. It's a deserted post office, pretty cool place! At night on our way to a party we walked into a bar, Frühperle, and arranged a gig there tonight. So Saturday 22:30, Tududuh live in Frühperle, Boddinstrasse 57a, Neukölln Berlin. 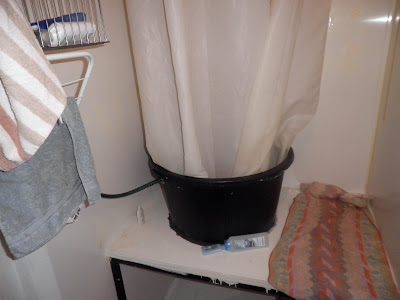 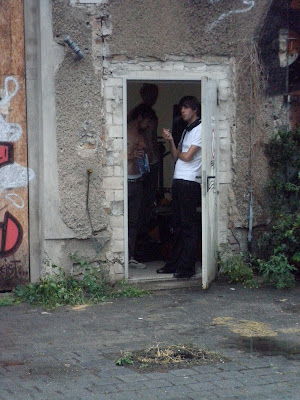 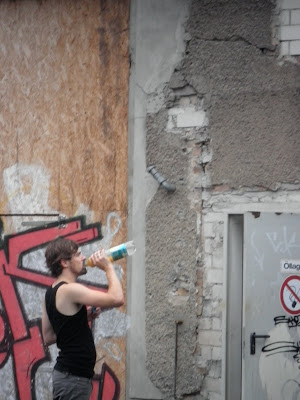 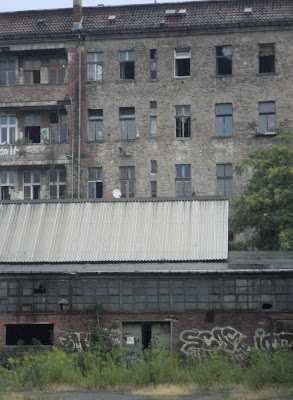 Recording video and doing a gig in Berlin this week. On day one we drove to Berlin with all our stuff. Since we haven't released our future number one hitsingle yet, we're on a tight budget. That means, no fancy hotel but a room somewhere in a dodgy part of town. Fifth floor, no elevator, no comfort and no toilet or cold water (just hot!) for the first day. Luckily our hostess found the key to the shower and bathroom this morning. Anyway, we're off to a rehearsal space now to perfect our electric set. Here's a pic of some Tududuhs waiting for their kebabs early this morning. They were good I must say. More quality prose like this tomorrow. 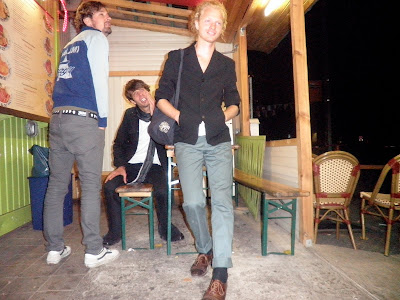