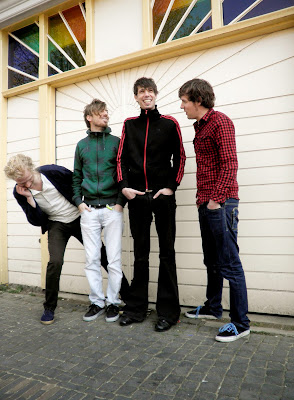 So, here we go. Another update! Yes! Indeed. What about? Well, about the music. Because I'm excited about the music. About three songs in particular. Three songs that we're gonna record next week with producer Erik Spanjers. I'm really looking forward to going into the studio. Talking about this might make you curious. I'm gonna have to disappoint you though, it's gonna take a while before the tracks will be out there. But if you don't like cycling, you're welcome to come see two of the Tududuhs play at a nice indie-festival on the ninth of May in dB's Utrecht. We might play a few new tracks! The songs we're gonna record will be a bit louder and faster than you're used to. With some edgy guitar and synth parts.. That's all I can say about it now. I don't really know why I'm writing this in English again by the way.. maybe because I'm working on lyrics for a new song and thinking in English at the moment. I'm at my parents house in Wassenaar with a few friends, writing and relaxing a bit. I have to be in good shape for the recordings next week! Weehoo! Ow, yeah, before I forget... Those lads pictured above are NOT male fashion models. They are Tududuh, the band. Thanks a lot to my flatmate Marieke Houwers for taking a few pictures.
Gepost door tududuh op 14:25 Geen opmerkingen: